A family-run hotel that can be found in the heart of the historic Diocletian’s Palace, Heritage Hotel Antique Split is the kind of accomodation that fulfills a guest’s desires of living lavishly. The property on which the hotel is located is of high value, simply because of the priceless monuments that surround it. These ageless structures also happen to be the primary attractions of Croatia. Travelers from around the world often come flocking to Croatia to view these attractions, while guests at the hotel can simply walk up to them.

The hotel is built while keeping in mind a combination of modern and antique interiors. The original rock stone walls blend seemlessly with the modern handmade furniture that occupies each room. The look and feel of the hotel is enough to take its guests into the Roman era and display an ambience of the Diocletian’s era. Each room gives you some fantastic views of the city. The rooms are equipped with all the possible basic amenities, including air-conditioning, LED TVs, telephones, unlimited access to free Wi-Fi, an exclusive and private mini bar, a safety deposit box, heaters, smart glass windows and wooden floors.

As far as meals are concerned, they are prepared by the family’s chefs while strictly following Health and Safety standards. Breakfast is ideally made available in a buffet-style during mornings, however; guests are free to order bed-in-breakfast facility as per their preference. All the local delicacies are prepared with utmost care to ensure that guests enjoy the best of what the city has to offer. 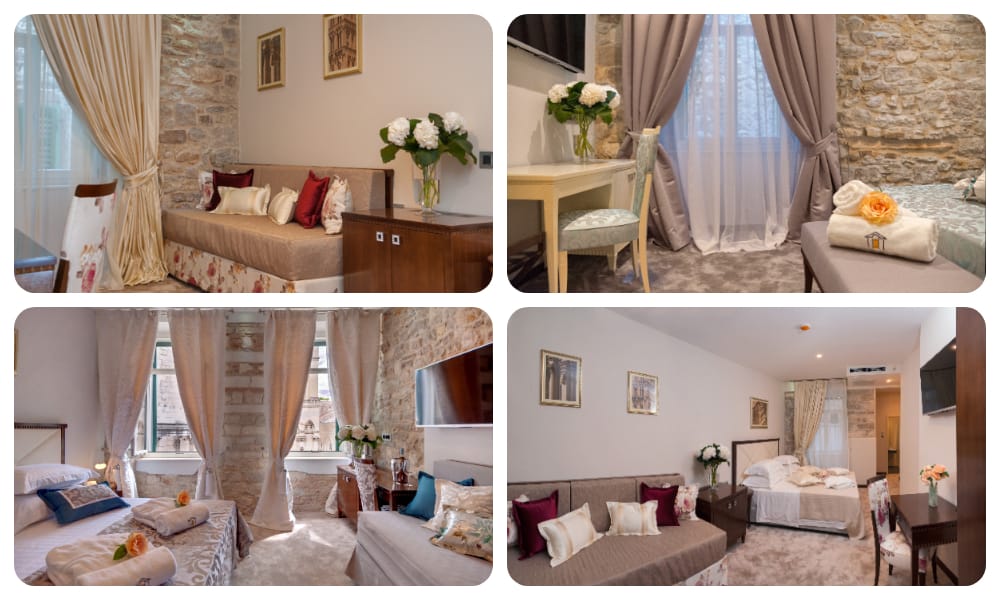 The hotel is just a few steps away from the Emperor’s Square which is also called “Peristil”. The Square is situated at the intersection of two main streets of Diocletian’s Palace and is further divided into two parts, i.e. the upper and the lower. Peristil served a historic purpose of separating the northern part, which was intended for servants back then, from the southern part, which was meant for the Diocletian. Peristil, thanks to its acoustics, is used as a natural scene for several musical and dramatic spectacles. Guests at the hotel can request staff to arrange their bookings for the same. Rejoice in joyous entertainment in the company of some of the finest artists. The St. Duje is also located at 2-minutes walking distance from the hotel. It was built to immortalize the legacy of St. Duje, who was executed during the reign of Diocletian. He was the protector of Split and its Archdiocese.

Apart from that, there’s also the statue of Grgur Ninski which is relatively closer to the hotel. Grgur Ninski was a Croatian bishop, who was of great importance for the Croatian language and culture. Locals say that rubbing the statue’s toe brings good luck. Guests are encouraged to come to Split and get lucky here! His palace also lies directly behind the statue. It was designed as a luxury villa, which was later transformed into a mansion. Due to its aesthetic beauty, the palace is known as one of the best preserved Roman monuments in the world.

Other tourist attractions that lie close to the hotel include Riva and Marjan. If you wish to go shopping or even just grab the delicious local dinner, Riva is the way. The Marjan Hill, which rises to a height of 178 meters, is home to numerous types of animals and natural institutes. Walking or running on groomed trails is a favourite activity of Split’s population and visitors. Once you get to Vidilica, which is the highest peak of Marjan, you will get to enjoy the view of the beautiful blue sea the Adriatic islands.

A stay at the beautiful Heritage Hotel Antique Split is nothing short of extraordinary. Not only do you get all the comforts that you may want but also get to experience the rich historic past of Croatia, and even live it!